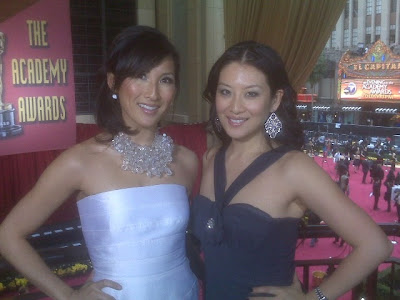 Oh, the Oscars….all the world is an expert in fashion come Oscar night.  Like most red blooded females with an interest in fashion I scour the red carpet footage, racking up my list of Do’s and Don’ts (and the No-She-Didn’ts and my favourite, the Somebody-Lied-to-You).  But let’s forget who’s wearing it for a moment.  It’s really about who is being worn.
While this year’s Oscar red carpet was filled with the heavyweights of the industry, we all know a star studded moment can make a star out of an aspiring designer (Jason Wu, anyone?).  Of course, that really requires that people know who IS the designer being worn, a job usually left to the media.  But what if the media are the ones on display?  Case in point – eTalk’s Tanya Kim and Elaine Lui.  CTV’s on-air talent had prime position overlooking the red carpet arrivals, and both looked fresh and lovely Oscar night.  But who were they wearing?
Canadian, of course.  Tanya Kim (left) wore David Dixon and Elaine (a.k.a. LaineyGossip.com) wore Andy The-Anh.  Even GlobalTV’s Cheryl Hickey – who was apparently no where near the red carpet – got into the Canadian designer action.  ET Canada held an online contest for viewers to select from three designers which would outfit Cheryl Oscar night.  Sodalicious’ designer Cindy Mathieu won out apparently.  You can see all three options here.
(eTalk host with the most Ben Mulroney wore a Tiger of Sweden tux and Hugo Boss shirt.  Um, calling Philip Sparks, are you there?)