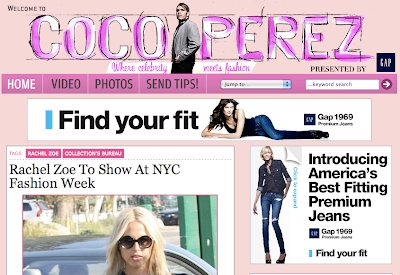 Trashing celebrities’ private lives has become such a multi-faceted business, Perez Hilton had to start a whole new web site just to dish on their fashion. The new blog, apparently the intersection “Where Celebrity Meets Fashion,” is named for Perez’s new fashion alter ego CocoPerez. When not doing trend reports on denim (so convenient when the site is “presented by the Gap” and blanketed by their ads), Perez comments on celebrity style. And with Kenny Chesney starting a clothing line (true!) and Rachel Zoe pimping for QVC at NYC Fashion Week, the celebrity fashion well does not show signs of running dry.

Did Perez really need to separate the “who’s canoodling whom” from the “who’s wearing what?” (No.) Is there value in a celebrity’s ties to fashion? (Sometimes.) From a designer’s perspective it is an incredible coup to have your creations worn by a celeb and seeing their red carpet poses pop up in magazines or on television. While it’s not the reason designers design, it is an undeniable thrill.

Now THAT we can get behind. So in a continuation of our mandate to show Canadian designers love, the F-list is launching a new feature next month with photos of Who Wore What (a.k.a. the triple dubya) in each edition of the F Word. We’ll show off recognizable faces wearing their favourite Canadian designs. Have a photo to share? Send to designer@f-list.ca.

Oh, and you don’t have to call me Coco.