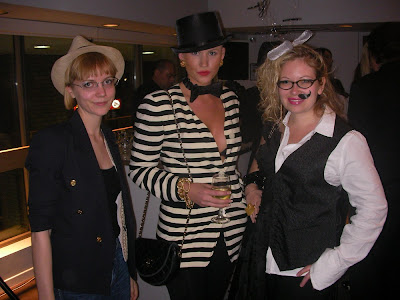 Last night the Textile Museum of Canada toyed with gender roles in an intimate androgynous-themed fundraiser hosted by the Style Council. Intimate indeed, with less than 75 people, mostly from the local fashion industry. The night kicked off with a discussion panel on androgyny in fashion and textiles that included author Derek McCormack (best known for his gothic writing and gay fiction), well-known fashion journo David Livingston and designer Mikhael Kale. To no fault of the panelists, this portion of the evening felt a little clumsy, with little direction or clarity of the discussion’s purpose. Better luck next time.

But the guests enjoyed an opportunity to embrace the costume portion of the evening. While most ladies took a well-travelled route of wearing fedoras, blazers and the occasional tie, jewellery designer Susie Love split the difference. Literally. Love played up the male on the left and the female on the right with all the proper trimmings, including half a mustache.

If there was an example of a man embracing the female fashion form in attendance, we missed him. But our sense is there wasn’t. Boys is heels? That’s not androgynous, that’s a drag queen (and a totally different party).