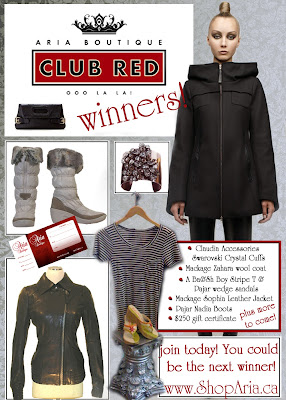 They say membership has its privileges. Whoever they were, they were right.

Aria Boutique treats its private CLUB RED members to some serious shopping privileges, and the F-list wants to share those with one lucky winner in our “Follow & Retweet to Win” contest. We’re giving one F-list follower a three-month membership to CLUB RED. Each month, CLUB RED members get access to a 48 hour sale with substantial discounts on specific brands or a select group of items. Members also have a chance to win designer merchandise (valued between $50 – $900) monthly and a $250.00 shopping spree each season with CLUB RED giveaways.

As part of this special promotion with the F-list, CLUB RED will host two giveaways in the month of December. You could win Portolano cashmere lined gloves OR Dean Davidson jewelry! Almost $1,500 in merchandise has been awarded since CLUB RED launched this summer (see above for more prizes)! The winning membership kicks off December 2009 through February 2010.

Members enjoy free shipping on all rewards and purchases.

Here’s how it the contest works:

2. Follow and Retweet the message from @theFlist between 9:00 P.M. Eastern Time on November 24, 2009 and 11:00 P.M. Eastern Time on November 26, 2009. Only the retweets sent during this time period are eligible for entry. Limit (1) entry per person and per Twitter user name. Multiple entries from any person or Twitter handle after the first entry is received will be void.

3. Check @theFlist on Friday, November 27 to see if you won!

4. Want to know more? Click here to read the Official Rules*.
* If you are having difficulty connecting directly to the Official Rules on our Facebook Fan page, copy and paste this link in your browser: http://www.facebook.com/pages/F-List/15367969237?v=app_2347471856&ref=ts