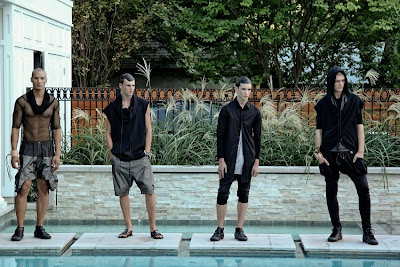 When it comes to fashion choices, women have men beaten in spades.  We have endless options and each season the trend gods pile on more to satisfy our fashion whims. It’s no wonder that fashionable boys are eager to diversify their wardrobe too.
Gentlemen, meet Ezra Constantine.
Late in August I popped into a bright studio where piles of Aldo shoes and Peroni beer surrounded the tiny workspace of designers Stephen Wong and Kirk Pickersgill.  The goodies are left over from Ezra Constantine’s official poolside launch the week before at a gorgeous Toronto mansion.  Any fashion lover with a pulse in Canada could not have missed the ascent of Stephen and Kirk’s luxurious womenswear line, Greta Constantine. Greta was an instant hit with socialites and celebrities.  But if you think Ezra Constantine is Greta’s new baby brother, think again.
“Everyone thinks it’s the rib of Greta, but it’s not,” Kirk says of the line.  “Ezra and Greta might date, but they’re not related.”
It was Kirk and Stephen’s personal jet-set taste that led to Ezra Constantine’s creation.  “We would never wear a proper suit or a tuxedo, even to an event that called for it. That’s just not our style.”
That style is what drives Ezra Constantine.  Since its quiet debut in October 2009 the line has appeared in small doses at Greta Constantine runway shows.  Leathered, beat up and battered male models often exemplified a hard, bad boy attitude.  It’s a look for the fearless man, but that dark avenger look is mostly runway styling.  Upon closer inspection, Ezra Constantine, the collection, is an elegant mix of functional details – a detachable hood here or cargo belt there – combined with fabrics like twill, French fleece, coated linen and mesh.  In their capable hands a button down shirt is no longer just a button down shirt.
Womenswear is about cut.  Menswear is about details.
It should come as no surprise that the line is inspired by a male model and friend of the designers, who also helps them style the collection based on his own personal flair.  But not every Ezra customer can wear black nail polish and tattoos.  The man who comfortably wears Ezra is fashion conscious without being too fixated on a look.  Kirk explains simply, “he likes to look different.”