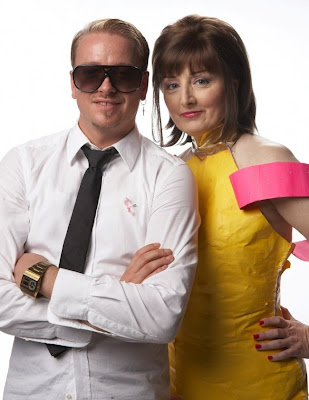 I love Post-its. When last night’s episode of Project Runway Canada began, I thought it would be a joy ride.  Lists are my daily passion – if not obsession.  I make lists for everything.  Groceries to buy, errands to do, iTunes songs to buy, dvd’s to rent.  Post-its are one of life’s greatest inventions for people like me.  Then the episode takes a turn. They introduce the “c” word.  Cancer.  The designers are making artistic gowns from Post-its for recovering breast cancer patients.

I feel for the designers this week.  Get kicked off the cancer episode?  Let down a cancer patient?  Let down a cancer patient in front of Iman?  I have a bad feeling about this.  This is not going to end well.  I’m eased through most of it, thankfully.  The designs are quite eccentric and inspired.  Jessica’s dress is flower power couture. Kim’s red feathers are stupendous.  Genevieve’s origami top is pure heaven.  Sunny ignites the runway with elegant movement and flow.  Jason means well, but it’s not happening.  He’s bottom two.  And then, he’s gone.
He’s going home on Post-it Notes, he says incredulously.  And then we find out Janice, his model – his muse – didn’t make it.  She passed away after the filming of that episode.  Janice Bourgon, single mom of a 17-year-old boy, succumbed to her battle with breast cancer.  I hate the “c” word.
The dresses are up for the next six days at AuctionWire.  Janice’s story is there too.  She was a fighter.  She focused on getting through chemo and radiation treatments for her son.  She smiled in the midst of battle as she hit the runway that day – wig and all – wearing Jason’s Post-it dream dress.  She lost her battle in the end, and Jason lost his.  Jason’s seems much less important.  He’s here, after all.
And so are you.  So bid on a Post-it dress at Auctionwire.  Or make a donation to the Canadian Breast Cancer Foundation.  Hug your mom, sister or best girlfriend.  If you’re a woman, check your breasts.  If there is one thing to be learned from the women of last night’s show, it’s be determined.  Be aware.  Be alive.
Now in an attempt to shake off the emotions from above…. In addition to the top five episode next week, PRC hits the runway in real time at LG Fashion Week.  And the F-list will be there, Twittering away!  (Of course, there are certain things about the show we can’t disclose.)