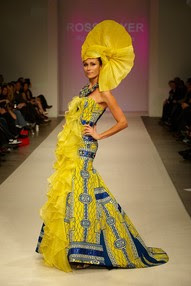 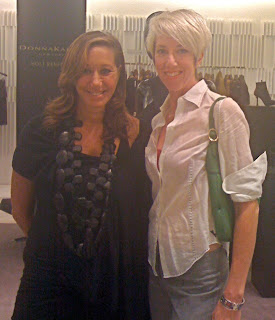 I’ve got a lot on the go right now so, admittedly, I didn’t give much thought before heading over to Holt Renfrew for Donna Karan’s personal appearance.  To be clear we are talking the DK of DKNY.  I was recently reminded of Karan’s iconic stature in Flare‘s September issue, that it’s been 25 years since she launched her 7 Easy Pieces collection during her reign at Anne Klein.  Since then Karan’s designs have become synonymous with ease and versatility.  She even brought us the first diffusion line when she launched DKNY, a less expensive line for the younger shopper.
Aside from being an incomparable designer for the modern woman, one whose work I always loved, I knew she is a yoga afficionado and a philanthropist supporting AIDS and cancer charities.  I’ve always appreciated the upbeat, no-fuss approach she appears to have in life.  The CFDA has honoured her an astonishing seven times.  And lately this queen of American fashion is sharing more of her spiritual side and influence through her Urban Zen Foundation.
Even knowing all that, I thought I’d just pop over to Holt’s with a pal for a quick photo opp of Donna hanging with her latest collection and that’s it.  But there is something so…compelling…about this woman’s presence.  Within minutes of being in the same room I knew that I had to introduce myself.
“Hi Donna, I’m Leesa and I’m a big fan.” (gush)
“Thank you.” Her eyes lock on mine and her smile is infectious.
“I have huge respect for you as a businesswoman and designer. You’re quite an inspiration.” (gush, gush)
“Thank you so much. Are you a designer?” she asks, still smiling.
“Fashion media. I have a web site about Canadian fashion called the F-list.”
“The what?” I realize I have a fleeting moment here.  I quickly pull a F-list promo card from my purse and hand it to her.
“The F-list,” I repeat. “It’s a web site devoted to supporting and promoting Canadian designers and retailers.”
“Oh, fantastic,” she murmurs, pondering over my F-list bookmark.  “Do you have good designers here in Canada?”
“Yes, quite a few. Some of whom are carried here.” (#1 – yes, I said “some of whom” like a nerd and #2 – Holt Renfrew, you’re welcome.)
We chat a bit more about designers and fashion weeks (she thinks mid-October is “NOT too late!” for ours), have a quick photo together and then she’s devoured by another fan, hungry for some DK conversation.
Like a schoolgirl with a crush, I’m smitten.  I want so badly to link my arm in hers and gab over lunch.  She IS an inspiration. And so, Ms. Karan…in light of keeping it simple, modern and very Canadian, I offer seven top  designers I think you would like:

Denis Gagnon – (right) a minimalist from Montreal with a tendency for the monochromatic.  He’s also absolutely brilliant and far too special to keep to ourselves here in Canada.
Jeremy Laing – this serious, young lad apprenticed with Alexander McQueen and often draws from the Canadian landscape for inspiration.  His work shows signs of Japanese influence yet somehow he maintains an organic, natural quality.
Pink Tartan – designer Kimberley Newport-Mimran reminds me a bit of Donna in that everything under the label speaks precisely to what Kim herself will wear.  Her collections are for the practical woman who knows how to balance girlish charm with a clean, modern edge. 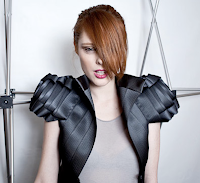 Greta Constantine – (left) Stephen Wong and Kirk Pickersgill may be known as the “jersey boys” for their expertise with the fabric, but their talent in creating edgy, feminine designs with all sorts of textiles is well-known.  Dare we forget their seat belt couture?
Rad Hourani – think urban warrior when considering Rad’s work.  He calls it asexual, aseasonal and anti-conformist.  I just call it awesome.
Joeffer Caoc – one of the first designers I discovered after moving to Canada and one of the nicest people on the planet.  Joeffer’s work is intricate yet subtle, classic yet unconventional and built for the sensible, modern woman.

Thieves – Sonja den Elzen’s fledgling line brings sustainability and style together for good.  Through uncomplicated (but expert) draping and detailing she works wonders with eco-fabrics for both men and women.
Dear readers, I encourage you to check out the article on Donna in last month’s Town & Country magazine.  You can download it at Urban Zen Foundation website.  It’s an unbelievable insight into her world and the power that one individual has to motivate a movement.
“What you have been given, it’s to give back.” – Donna Karan 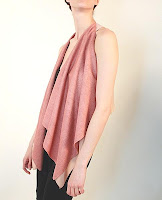 I’m a bit in love with a couple of things right now, and they all happen to be at the shop UPC Boutique. I first fell in love with Faren Tami’s darling coral silk vest and its blushed, feminine swing.  Then I stumbled upon the Disaya trompe pleated dress in blush and black.  Anyone who has ever seen the movie Steel Magnolias, and knows me, must know that “my colours are blush and bashful.” (And if you don’t, rent the flick. It says it all.)  It’s a sucker punch to my heart, I’m hooked.  UPC also carries Montrealer Rad Hourani’s unisex line, Rad by Rad Hourani. Without question it’s time to add these to my wardrobe. 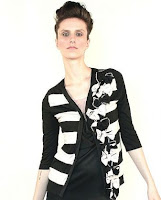 After shopping (and yes, they ship internationally) I turn to the blog for their latest state of fashion advice.   The latest post is about cardigans, and here is another winner from Disaya – the striped bow cardigan.  Is there anything sweeter to wear on fall’s early nights?

You can follow UPC on Twitter too.  Regular Tweets reveal their “Look of the Week” where you get 10% off a purchase of any item from that week’s look…that’s one look for men and one look for women.  But if you’re in Toronto, just swing by next time you’re in Yorkville.