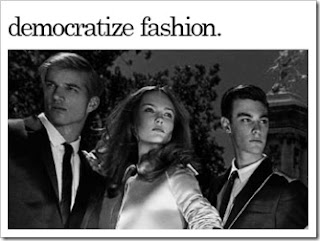 Reuter’s reported on Fashionstake.com and its founders, Harvard grads Vivien Weng and Daniel Gulati, back in April. Even before the September launch, the business had gained exceptional attention. The model – eliminate the retailer, give the customer the power to help a designer succeed – would never work, they were told. I recently spoke to Weng who talked about Fashion Stake’s early success and what the future holds. In much the same way Groupon and TeamBuy use crowd-sourcing to offer group deals, Fashion Stake unites customers behind individual fashion and accessory designers. For a select time period, pieces are available for pre-buy to ensure minimum orders are met, which collectively raises capital and awareness for up-and-coming designers. “We wanted to help the designer, but do it in a commercial way.” (It should come as no surprise that one of Fashion Stake’s backers was also an early investor in Groupon.)
The initial concept at launch actually invited customers to invest in designers (i.e., buy a “stake” in said designer) via different models of participation, but the most popular out of the gate was the option to pre-order items from a designer’s collection. “The concept [of a stake] was sexy, but we needed to offer something tangible. Pre-ordering solved that problem.”  It also solves a capital problem for the designer, raising the funds needed to produce an item. And just like other crowd-sourcing platforms, customers are only charged if Fashion Stake pre-buys reach the minimum.
In the near to far future, depending on funding and resources, Vivien and her team hope to increase opportunities for customers to connect with designers and vice versa. They are also looking for ways to open the platform to provide designers with a DIY approach to launching their own shop on Fashionstake. “Our focus right now is mostly New York-based designers because that’s who we can physically research. We need to find a way to work with designers that is a sustainable for us, that’s scalable.”
Weng hopes their plans will bring more diversity to their designer offerings. And if their plans come through, you can expect different kinds of designers – and certainly more Canadians – to use Fashion Stake as a way to reach a broader audience.  JUMA’s scarves have already made two appearances this fall.
Friday night capped off Pre-Fashion Week with a short presentation by label JUMA at the Spoke Club.  Inspired by their trip to Kenya and Zaire, the sibling designers teamed African-inspired prints with their signature androgynous style.  A stunning line of scarves, which previewed on FashionStake.com the same day, hung from the ceiling like tribal birds. 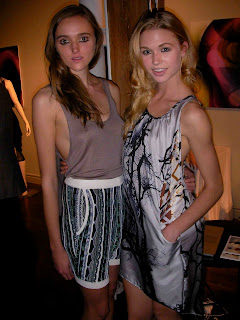 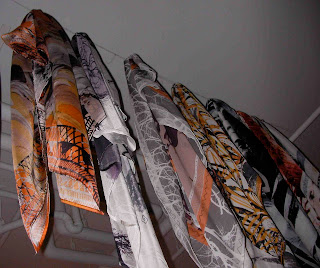 As understated – shy, even – as the designers behind Greta Constantine are in person, these boys know hype.  And they know how to keep people wanting more.  Between strict instructions that “doors would close at 8pm” and the leaked info about a guest appearance by Coco Rocha it was no wonder the crowds spilled onto the street in a Studio 54-style mad dash to get inside.  The collection proved once again that Greta Constantine knows exactly what its customer wants – glamour without the fuss. 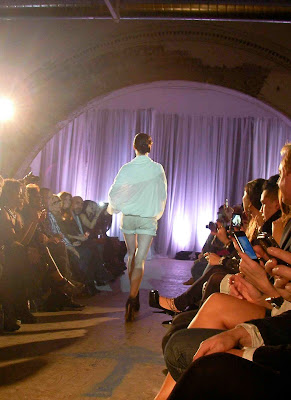 The winner of this year’s annual TFI New Labels design competition will enjoy an added prize from everyone’s favourite fashionista. One year after her 50th anniversary, Barbie® has teamed up with Toronto Fashion Incubator to award $10,000 in cash along with the $25,000 in prizes from ELLE Canada magazine.

This year the playing field has been levelled. What could be more challenging than taking on the little black dress? Applicants must be professional Canadian women’s wear apparel designers who have been in business three years or less.