Last week, near the opening hours of World MasterCard Fashion Week, about a hundred or so well-heeled guests filed into a Ritz Carlton ballroom for a little star sighting and the first CAFA announcement. CAFA, or Canadian Arts and Fashion Awards, was recently created to recognize and celebrate outstanding achievement and emerging talent in Canadian fashion design. Its lofty goals include helping spur the economic development of the Canadian fashion industry.
That said, there actually is a $10,000 prize for the Emerging Talent Award. It’s the one category eligible to self-nomination and refers to someone with fewer than five years in business. Otherwise it’s mostly bragging rights for winners. Outside of Emerging Talent, the award categories include:

Elisha Cuthbert, Canadian darling and a front-row-at-Toronto-fashion-week kind of celebrity, was there to announce the first-ever CAFA nominees. (As part of the nominating committee, yours truly had a hand in picking them.) 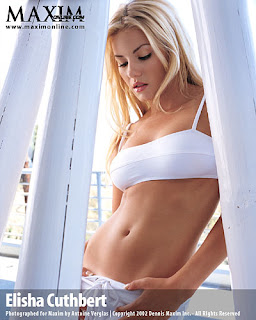 When you come up with Elisha Cuthbert as the celebrity muse for a challenge, you know you’re digging deep in the barrel of Canadians in Hollywood.  (Sorry Elisha, but what have you done lately?!)  The title of this week’s show was “Claim to Fame” and the designers were to create something for Elisha to wear for a night out on the town.  (We’re guessing in Cuthbert’s world this means room service with her hockey player du jour or a Maxim magazine party.)

The designers seemed pumped to see Cuthbert up close and personal when Brian brought her by the mansion for one-on-one consultation.  A few drinks later the group began to compete for her time to garner the most information about her style.  “So you like classy not trashy, right?” “Are you looking to pick up?”  (Looks like they had her pegged just right!)
Once in the design phase it was an all out Margerita vs. Brandon showdown as Margerita accused Brandon of copying her dress.  The he-sketched-but-she-sketched-first debate lost its interest once it became clear neither designer was going to finish well (if at all!).  And it was no surprise when they both ended up in the bottom two.
While Brandon’s overconfidence and lack of material on the bottom end hindered his work, it was Margerita’s poor construction and fabric choice that sealed her fate.  We caught up with her after the show:
F-list: What did you expect going into the show?
MV:  As a streetwear designer I knew it would be a challenge designing cocktail dresses.  I had no idea it would be so intense, so militant in what we could do, when we could do it.
F-list: What do you regret or wish you’d done differently?
MV:  I wish I had stuck to what I know in some cases, like the war challenge. I’ve done lots of military style stuff in my own design (for her label Proper Apparel), and I should have stuck with that. But I didn’t think it was clear whether I could make an outfit or a dress, and I went with a dress.  I’m disappointed I didn’t show my strength there with a jacket.
F-list: So what now?
MV: I actually did finish that dress I designed for Elisha the way I wanted.  I’m adding more evening wear choices into my line, which is new.
By the way, the winning design was by Jason Meyers. Those of us who are familiar with Jason’s work have seen that particular design in his previous collections. The scooped back with ruffle edge is a darling look, and it is a good example of “stick with what you know.”
Next week the designers work in teams. Let the egos roll! 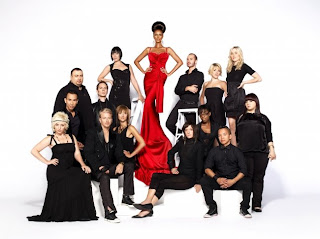