This is a continuation of Yellow Part One.

My latest obsession with the colour yellow continues in Netflix’ latest season of Abstract: The Art of Design. This series dives deep into the creative process of well, creative people. Episode one features Icelandic-Danish artist Ólafur Elíasson. Elíasson is a joy to watch; his immersive installations mesmerize, even from the perspective of my tiny tv. Their massive scale and innovation must be astonishing to witness in person. Imagine my delight to see the sunny yellow colour play a central figure in some of Eliasson’s most famous work. About halfway through the yellow sunflower pops back into my consciousness and onto the screen – and as Eliasson’s second arc – with Little Sun.

Little Sun started with an Eliasson and his team’s idea to bring affordable, clean energy solutions to the 1.2 billion people in the world who don’t have access to an electrical grid. It became a social business spreading clean, affordable solar energy around the globe. It’s a work of art that works in life.

This high quality, portable solar lamp is the perfect accessory for the garden, patio and weekend camping trip. But adorable practicality isn’t why I really love it. For every Little Sun sold, one goes to their partners in rural Africa, where they train local sales agents and bring solar energy to those who need it most. Unfortunately, supporting this social enterprise from Canada is challenging – the website only ships to the U.S. and the only local retailer listed is the Royal Ontario Museum, who claims to never have stocked the item in the first place. I’d like to buy Little Suns for friends and family this Christmas, so I’ll keep you posted of my search.

I have the Penguin in red, which do you have?

In 1980 a graphic designer by the name of Paul Rowan couldn’t find a nice window shade to hang in his apartment window. So he made one and people liked it. It was then that Rowan teamed up with his childhood friend Les Mandelbaum to create Umbra (Latin for “shade”).

Such has been the circle of design at Umbra ever since. Rowan and Mandelbaum’s mission of bringing intelligent design to everyday items has resulted in some iconic pieces over the years, which were on display for guests at a recent anniversary party held at their Toronto flagship store. In the process they’ve become a global housewares design company and Canadian success story.

The emphasis on design cannot be lost on their customers. Karim Rashid, the flashy and famous industrial designer (and Torontonian), has been a catalyst to many of the signature items including the Garbino Can, his first Umbra collaboration in 1997. It was an instant hit, catapulting both Rashid and Umbra to household names. Today it’s in the permanent collection at the MOMA.

Umbra encourages their designers to rethink everyday objects. Every designer has a byline on Umbra website next to the product they designed. A global company who cares about keeping it real with their people? Now that’s intelligent.

You know it’s fall when people are talking Nuit Blanche. This Saturday, October 1st the all-night contemporary art event returns to Toronto streets and galleries. Why not start your evening off with some VIP treatment at the Art of Fashion event?
At the Art of Fashion, ten emerging Canadian designers bring their collections to life in an exhibit space and through a fashion show where they compete for 2 awards: Most Promising Designer is decided by an industry judging panel, and Best Exhibit is voted by the public. You can also shop the Art of Fashion’s designer boutique featuring original works by apparel and accessories designers.
Win a pair of tickets to the Art of Fashion’s VIP reception (6pm – 7pm) at the Pantages Hotel featuring complimentary food and beverages. Send an email to info@f-list.ca with ART OF FASHION in the subject line by midnight on September 27th for your chance to win. Winners will be contacted via email and confirmed by September 29th. 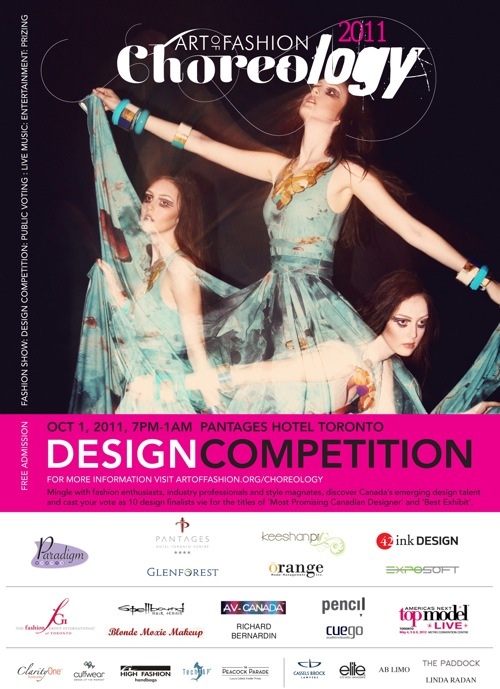