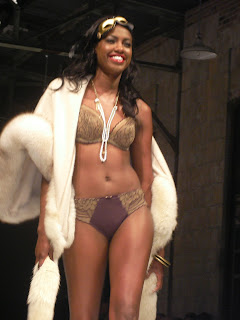 If we paired lingerie with fur, would it be more appealing to Canadians?

Seven of France’s top lingerie brands showcased lacy goodness in show titled Secrets of Seduction last night at Toronto’s Wychwood Barns, the beautifully renovated TTC streetcar repair buildings on the city’s west side. Toronto’s fashion peeps must be in “staycation” mode as the usual industry players were nearly all accounted for in the crowd – socialites, fashion editors, designers and stylists.

While the night was about France, the F-list had to wonder…is there anyone designing lingerie here in Canada? There are a handful of designers in Vancouver (ok, a handful is generous…we could dangle them from one finger) known for their lingerie lines. Christine Vancouver has been a stalwart of the category since 1979 and even has Oprah wearing her wares. Patricia Fieldwalker is another west coast-based name. We suspect there are designers in Montreal known for their silk and lace concoctions. When pressed to name names, most people we spoke to couldn’t conjure up a single designer.

What is it about Canadians that we shrug off the desire for sexy underthings? Are we too practical? Too conservative? Too frugal? Or are we usually too cold to think about it? If we paired lingerie with fur, would it be more Canadian?

Do you have an opinion? Why the lack of skivvies designers in the North? Feedback welcome.