Pour me a double, we are weeks away from the end of an era. This Sunday AMC’s Mad Men returns to the airwaves for its final season.

It should come as no surprise that I – a student of advertising, lover of mid-century modern architecture, New Yorker at heart – was hooked from episode one. Beyond the glamour, intrigue and Don Draper handsomeness, Mad Men captured a real renaissance in the advertising world. The decade of the 60’s, this was the advertising’s big boom.

Seven seasons into Mad Men, I’m still surprised to see life in the early days of corporate America – the constant smoking, rampant sexual harassment, three-Martini lunches. It’s also a reminder of how much still needs to change – all those middle-aged white men at the top, not enough women and minorities in positions of leadership.

Speaking of Mad Men’s boozy, liquid lunches, those days are definitely over. Today’s business lunch is more likely to be juiced or blended than shaken or stirred. In fact, I’ve seen some colleagues skip the meal entirely, opting  to chat business over a spin class instead.

Because walking meetings are so 2013, aren’t they?

Actually, the walking meeting has been around a while and for good reason. Fresh air feeds inspiration. It’s scientifically proven. In my New York dot-com days we’d often take a team meeting or brainstorming session to Madison Square Park (even before Shake Shack). So instead of the boardroom for your next meeting, I recommend you head for the front door. For those in the entrepreneurial set (like me) I say we take the business meeting to a more pleasurable setting altogether, be it a tennis court, yoga studio or nail salon.

As long as you’re inspired and productive, who needs a boring boardroom? 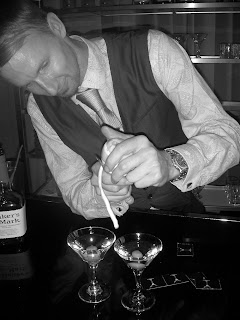 Celebrating a month-long emphasis on the cocktail, the LCBO made a big splash last week at Toronto’s Carlu event space with a 60’s-inspired evening of “Classic Cocktails.” Bars served up classics like the Martini, Rusty Nail, Negroni and Manhattan while nostalgic party hors d’oeuvres satisfied guests. (Aside: Am I ever thankful party food has evolved beyond the pinwheel sandwich and deviled egg.)
Most guests embraced the 60’s theme wearing plenty of prim and proper. After all, there was a special guest worthy of impressing – Mad Men’s own Janie Bryant, the award-winning costume designer, was in attendance. As a nod to the show’s fashions, outfits from Toronto’s vintage wardrobe rental studio, Ian Drummond Collection, were displayed throughout the party, exemplifying how well 60’s fashion fits in 2011.
To drive the theme home, literally, guests received Janie’s book, The Fashion File: Advice, Tips and Inspiration from the Costume Designer of Mad Men in their gift bag.
Since AMC’s Mad Men debut, 60’s nostalgia in fashion has been on the rise and hit fever pitch last year. In many designer collections, fashions seen on the small screen have been influencing the runways and are set to do it again for Fall 2011. As the show enters the late 60’s expect to see this evolution realized by designers.  Check out this great article on Mad Men and New York Fashion Week.
And if you haven’t seen January Jones in the new Versace ads, click here….wowza!