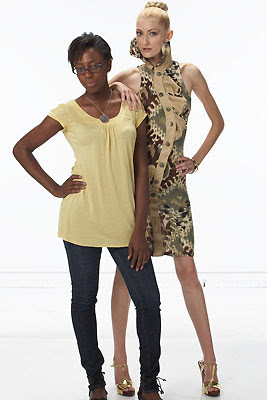 Last week’s debut episode set 14 designers on a mission of camouflage.   After racing for fabric, contestants had to make an outfit that would be displayed in the Canadian War Museum.  Moments after they arrive at their workroom to begin construction Jaclyn’s nerves rattle her to the point of hospitalization and elimination.  Ouch, choking on the first day.

One ambulance down, one to go!  Sadly, not long after Jaclyn departs, Danio succumbs to his own health issues. The painful side effects from his battle with cancer and chemotherapy treatments force him to leave the show.  Too bad, we were looking forward to his expert approach. (We spoke to Danio after the show, and he’s in good spirits, if not great health.  A recent bout of the flu has him recovering in “track pants and a Fendi scarf.”  We say high fashion is a good ally in recovery. Godspeed, Danio!)
The 12 remaining designers weren’t safe from elimination. Toronto’s Sunny Fong (voted best hair) wowed with exquisite tailoring on a fitted jacket and flirty skirt, but Adejoke Taiwo’s high collared, sleeveless dress – pictured – was the obvious winner.  (Sorry Rita Silvan, you were wrong, wrong, wrong on that one!)
Camille’s lack of focus and direction gave the judges no choice but to send her home.  She’ll return to designing her line, Dutch Blonde and obsessing over shoes.  (She told us after the show that she’s dying for a pair of Guiseppe Zanotti shoes, and has high praise for Brian Bailey’s stylish choices in footwear. Go B.)
Our fave quip from the judges came from Shawn — “That business on the bottom of that dress has no business being on the dress.”  Oh yes he did.
Tune in tomorrow night (10pm, Global) as Elisha Cuthbert takes the crown for the most irrelevant celebrity guest appearance.  (Seriously, was everyone else in the world busy?)