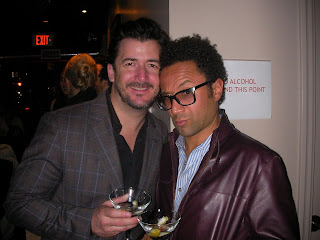 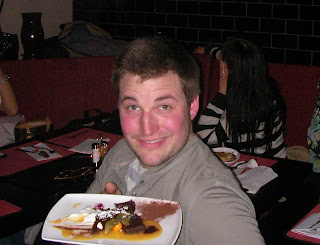 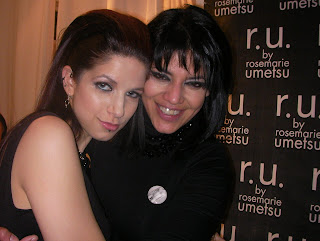 Designer Rosemarie Umetsu hosted a fete for photographer Caitlin Cronenberg this past Tuesday night (photo, Caitlin, left with Rosemarie). The ticketed affair, held at Umetsu’s atelier on Avenue Road, was a fundraiser for POSER: A Collection of Nude Photographs by Caitlin Cronenberg. The book is due out next fall. The party included heavy hitters like David Cronenberg (Caitlin’s dad wouldn’t miss it!), Jeanne Beker, Jian Gomeshi and Rex Harrington. It’s not often I’m invited to sip bubbly while 20 naked people stare at us from the walls. You can try it yourself through April 30th at 96 Avenue Road, just don’t count on any leftover champagne!

Enough with the naked, time for the clothes. I split to catch up with friends for the Project Runway Canada finale at Toronto soccer enthusiast’s bar, The Football Factory. I find guest judge Evan Biddell playing host (photo, Evan shares a plate of desserts). Sadly I didn’t find the other finalists and Toronto residents Jessica and Jason, but Shawn Hewson (photo, Shawn showing off his trademark expression with Michael Sullivan of Victor restaurant). The PRC fans might have looked out of place from the bar’s regular sports crowd, but it didn’t dampen anyone’s enthusiasm. (Why a sports bar? Endless televisions of course!)

How would the final runway show at LG Fashion Week play out? Who would break down backstage? And who would win? In the end the judges couldn’t contain their excitement over Sunny’s Alexander the Great-inspired collection admittedly, neither could I. Congrats Sunny!