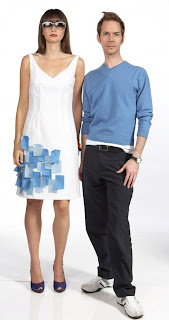 Desperate times call for desperate measures.
This week’s Project Runway Canada brought some delicious and some cringe-worthy moments.  While the Kim vs. Jeff drama continued, we watched poor Jeff sink to a new low.  Blame it on lack of sleep, stress, the barrage of negativity coming from many sides…the dude drew fake stitches on a dress.  (Which wouldn’t be so bad if we hadn’t already witnessed him glue a dress together in an earlier episode. Eeesh.)
Thankfully we had a chance to discuss this with him, and it turns out he’s supposedly REALLY talented with hand detailing.  But given the show’s challenging crunch times, we never got to see this side of Jeff.  (His new website may finally give us a peek at this hidden talent once it launches.)  Regardless of how Kim felt about him, he can’t be a slouch of a designer – he’s worked with Brian Bailey and Wayne Clark after all!
So we’re going to enroll him with a complimentary time management course and wish him the best.  The most delicious moment on the show was watching Jessica win the Winners’ challenge.  Her dress will actually be produced and carried by Winners stores – in fact, limited locations began selling it in fun spring colours as of today!  We can hear her now — Jessica Biffi in the HOOOOUSE!
P.S. The military-inspired coat on Michaelle Jean?  Care of the legendary Pat McDonagh!  Keep your eyes peeled for Pat’s red dress at the Heart Truth Show during LG Fashion Week.